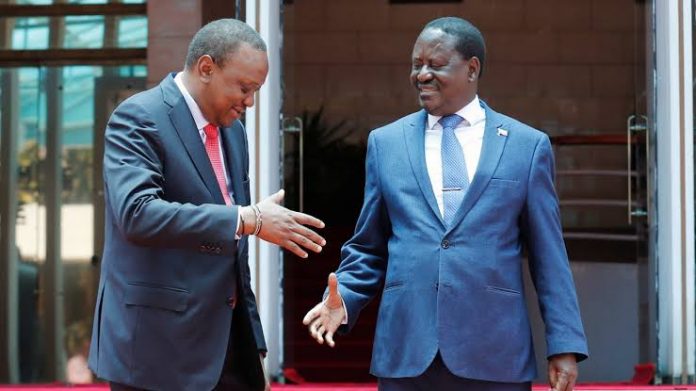 China refused to give Uhuru Kenyatta a 368 billion loan until the next President gives an undertaking that the government of Kenya will continue paying the loan after the end of Uhuru Kenyatta’s tenure. President of China, H.E. Xi Jinping, personally asked President Uhuru Kenyatta to travel to China with Raila Odinga and not Dp Ruto.

The Chinese government believe DP William Ruto cannot be the next president of Kenya. That is what is taking Raila Odinga to China with Uhuru Kenyatta. Now you know.

African Union envoy Raila Odinga will accompany President Uhuru Kenyatta to China tomorrow to seek funds for the extension of the Standard Gauge Railway (SGR) from Naivasha to Kisumu.

This is a positive result of the March 2018 handshake between President Uhuru Kenyatta and Raila Odinga, the main purpose of which was to bring down heightened political temperatures. This trip would have been impossible without it.

According to Mr. Odinga, they are optimistic that the Chinese Government will give Kenya Ksh.368billion loan from China to Kenyan government.

Speaking in Kisumu county on Saturday, the AU envoy said the funding will also help revive the Kisumu inland port that slumped following the collapse of the railway transport.

He said the new SGR line will extend from Naivasha to Narok, Bomet, Sondu and finally Kisumu.

Odinga who was recently appointed as the African Union’s High Representative for Infrastructure Development in Africa revealed that the completion of the SGR will have a huge economic impact on Kisumu and transform it into a regional hub.

“We are going to establish a special economic zone in Kisumu and make the city the hub of East Africa,” he said.

This new development has not gone down well with DP Ruto. He has questioned why President Uhuru Kenyatta is entertaining Luos, who according to him are known to destroy Railway lines.

Raila is going to China as a guarantor who will continue paying the loan after Uhuru’s exit! The Chinese are smart.

Revealed: Why The Chinese Wants Uhuru And Raila In China