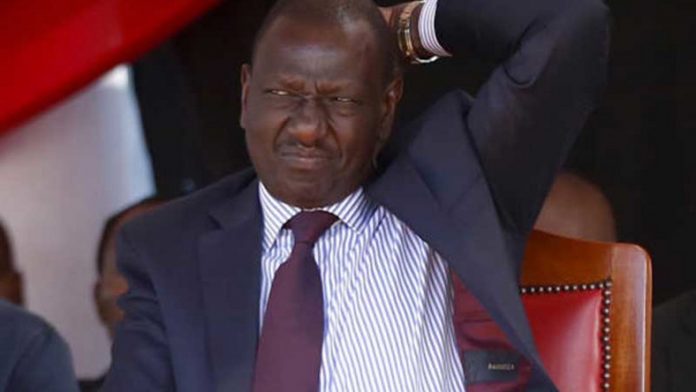 “It’s those who support the handshake or those who attack Ruto that got the jobs,” Sirisia MP John Waluke said.

He said the President is the head of the country and all Kenyans should feel part of the government through well-distributed appointments.

Most of those who benefited from the state jobs last week were former MPs.

They MPs spoke on Sunday at Nangili Girls School in Likuyani during the fundraising for churches in the area.

Mabonga said it was apparent that those who want jobs in government can only succeed by being seen to bash the DP at public meetings.

“Khwalale if you are looking for a job then you will easily get it by hitting at Ruto to please the appointing authorities, “Mabonga said.

Kibunguchi said the handshake should benefit all Kenyans if indeed it was for the good of the country.
The legislators asked Uhuru not to betray Ruto and abandon him ahead of the 2022 polls.

Jarunda News understands that supporters of the “Kieleweke” team are slated for plum appointments, where tens of them have been tapped to run key State institutions once gazetted as early as today.
Supporters of the handshake between President Uhuru Kenyatta and ODM leader Raila Odinga, including Kanu and Wiper, are among the major beneficiaries of the appointments, which political watchers say may have a bearing on succession politics.

It is not clear if the DP was consulted on the sharing of the 82 positions but there are indications that former Prime Minister Raila Odinga and former Vice President Kalonzo Musyoka were consulted.

President Uhuru is showing DP Ruto that he can take care of his people kikuyu more than him. It's a good strategy to vanquish DP Ruto among the Kikuyu, we support the appointments fully. @Aaroncheruiyot @kipmurkomen

Nominated MP Maina Kamanda, Waweru and former Jubilee Vice Chairman David Murathe are key members of the “Kieleweke” brigade, opposed to the ascendancy of Ruto to the top seat in 2022.

19-year-old Man Killed By Girlfriend In Bomet Over A SportPesa Congratulations...