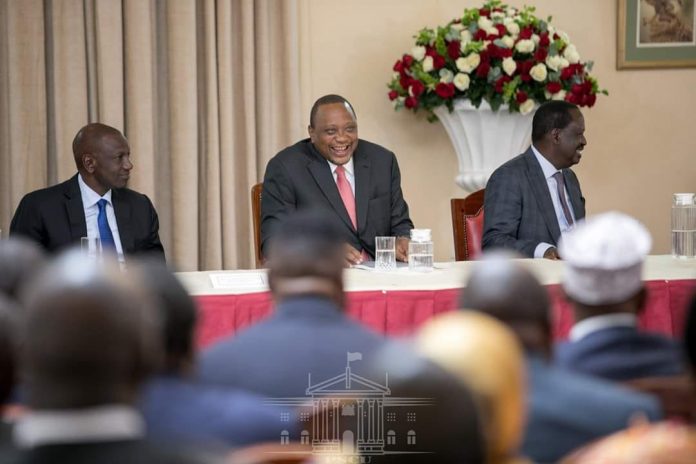 FORMER Prime Minister has this afternoon disclosed how he spent 19 hours negotiating the handshake with President Uhuru Kenyatta.

Raila said he and President Uhuru drove themselves individually to the secret venue where they spoke for 19 hours.

Raila was one of the the few leaders who spoke during the 90min meeting attended by DP William Ruto, several governors and other leaders.

Others who spoke were Head of Public Service Kinyua who was the MC, the BBI Task Force chairman Yusuf Haji, DP, Kalonzo Musyoka and Secretariat member Amb Kimani.

DP Ruto who spoke for about 8 min knowledged that the presentation was a historic moment to deliberate on uniting Kenya.

He invited Hon Raila who spoke for about 10 min taking the meeting through the history of BBI and handshake.

President Kenyatta spoke for 35 minutes appealing to leaders to go easy on politics. He corroborated the story that he met Raila for 19 hours discussing the unity.

No content of the report was released at the meeting but the actual report will be released by tomorrow.

Gideon Moi On Why Dp Ruto Can’t See His Father